Understanding the War in Ukraine: Home

This research guide provides information on the current conflict in Ukraine, including links to historical background information, trustworthy news sources, and answers to questions you might have. When consuming information on social media or in the news, remember to be a media-savvy reader and a fact checker. Ask yourself these three questions from the Stanford Civic Online Reasoning project:

These articles are primers on the conflict between Russia and Ukraine: 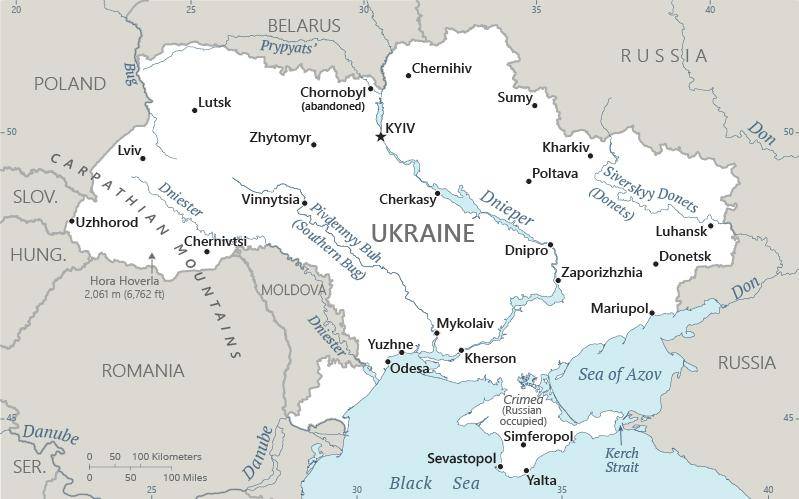 Map of Ukraine (Click to enlarge. Source: The World Factbook).

Map of Russia (Click to enlarge. Source: The World Factbook).

How do you pronounce "Kyiv"?

In this video, "University of Kansas Assistant Professor of Slavic Languages & Literatures Oleksandra Wallo explains how to pronounce the name of the capital city of her native country, Kyiv, Ukraine."

The Geographic Relationship Between Russia & Ukraine

This video from Brown University's Choice Program explains the geographic relationship between Ukraine and Russia. Ukraine was a controlled state of the Soviet Union until its independence in 1991.

Is it Ukraine or "the Ukraine"?

"The Ukraine" is the preferred term of Russia. It implies that Ukraine is a territory or state of Russia. Ukraine (no "the") is preferred by most Ukrainians and is recognized internationally as the official name of the country.

Is it Kyiv or Kiev?

Could there be a draft in the United States?

We (the librarians) are hearing this question a lot from students.

Congress's ability to enact a draft expired in 1973. It would take a new act of Congress to reinstate the power of the draft, allowing the president to authorize a conscription lottery.

In short, it does not seem probable. Currently the U.S. is not sending troops to Ukraine and is instead relying on sanctions.

What is Shield's Up?

The FBI and the U.S. Cybersecurity and Infrastructure Security Agency have issued a heightened advisory on cybersecurity risks that could result from the conflict. Shields Up is a public resource that gives organizations and corporations guidance on how to best protect their network and digital assets from cyberattacks. This may result in certain websites being unavailable.

According to the CISA website (Feb. 28, 2022), "while there are no specific or credible cyber threats to the U.S. homeland at this time, Russia’s unprovoked attack on Ukraine, which has involved cyber-attacks on the Ukrainian government and critical infrastructure organizations, may impact organizations both within and beyond the region, particularly in the wake of sanctions imposed by the United States and our Allies. Every organization—large and small—must be prepared to respond to disruptive cyber activity."

SWIFT stands for "Society for Worldwide Interbank Financial Telecommunication." It is a communication network that connects banks from around the world and enables them to receive payments. As an economic sanction, Europe and the U.S. are barring some Russian banks from using the SWIFT messaging system, crippling the ability of these banks to send and receive payments from outside the country.

Young Ukrainians and Russians are using social media to report on their real experiences. However, there are already many reports of fake videos of the crisis in Ukraine circulating on TikTok, many not even created in Ukraine. When in doubt, look closely at the footage, audio, and comments for clues about its authenticity and use your own searching skills to independently verify what you see using credible news sources.

How to spot these fakes:
Abbie Richards (science communicator and founder of EcoTok) lays it out for you on her TikTok and Instagram accounts: