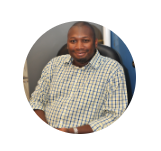 Mr. Adolphe Coulibaly was born in the francophone country of Ivory Coast, West Africa. He graduated from St. George’s in 2004. After St. George’s, he attended Brown University, then transferred to Amherst college, where he earned a BA in political science and French.

At Amherst college, during his junior year, he helped the men’s basketball team reach the first national championship for the school. During that same year, 2007, he also proudly represented Ivory Coast at the African games in Algeria.

While here at St. George’s, Mr. Coulibaly was an ISL award winner in basketball and track in 2003 and 2004, a 2003 Boston Globe All-Scholastic award winner, and in 2004 an ISL Sportsmanship Award Winner in Basketball. He was a dorm prefect in Wheeler his senior year, and captain of the boys’ basketball and track teams that same year, when he was named the ISL Most Valuable Player for track and field. He was a member of Insight and of our International Student club, and the recipient of the Samuel Powel cup at Prize Day in 2004. He also wrote an article for the Red and White on the “line between hazing and traditions.” That article earned first place in the Providence Journal for News category.

Mr. Coulibaly has been teaching French since 2008. He joined the SG faculty from 2013 to 2016, and is now teaching at the Moses Brown School where he served as Sophomore class dean for 3 years. In addition to serving on the diversity committee, he is currently chair of the World language department.

Where in the world?